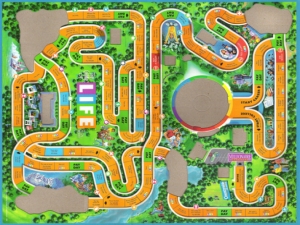 Where the hell is Millionaire’s Mansion?

My last girlfriend believed that if you really wanted something in life, all you had to do was ask the universe for it. I’m not talking about fantasies of winning the Powerball jackpot or having a three-way with Penélope Cruz (um, wait, that one was mine) but rather, asking for things that were somehow attainable. She’s one of the most diligent people I’ve ever known and has certainly reaped the benefits of her hard work. She just believes in her heart that it also doesn’t hurt to get a little help from the great beyond. “If you put it out there,” she’d say, double-bubbling with optimism, “it will come back to you.”

Now whenever I’ve tried to put it out there, the universe generally stomped on it with its stiletto heels (I see Eddie Izzard as the universe) and it hurt like a motherfucker. Maybe that was because I’m one of those people who believe that everything happens for a reason, and that reason is — everything is totally random.

A year or so after we met, either because of the cosmos or randomly, we broke up. We’re still friends and were talking recently about her theory of asking the universe for relative shit, or as I like to call it “playing the stupid game of life.”

She made a few interesting observations. We were chatting about my father-in-law, Marty, who I wrote about the other day, and she asserted that maybe he was the father who I always wanted (because God knows, I certainly didn’t want my own), and here was the universe giving me something that I desperately needed without me even asking for it (except for that one niggling detail of Marty now being dead – thanks for nothing, idiot universe!)

Not only was she right, but the truth is that I had always asked for it, maybe not out loud, but certainly in my thoughts and whatever passed for bedtime prayers, ever since my father went to prison when I was four years old. Twenty-five years later when I married, Marty came into my life and filled the hole in my heart.

I had always wanted to be a writer, she further affirmed, and had put it out there ever since I was in kindergarten and it has unmistakably come back to me. And it’s not at all random because it’s the only thing I ever wanted to do with my life and the universe listened and that’s why you’re reading this now instead of me yanking out your appendix or embezzling your 401k.

“You also always wanted a hot writer girlfriend. And the universe came through for you again. Big time!” she finally reminded me. “If you think about it, the universe has really given you everything you’ve ever asked for.”